The blog I “wrote” yesterday, using the words of Wilfrid Owen, ()

was intended as a tribute to all those men who came to fight for us, on the European continent, and mostly in France. I wanted to thank them and their families, posthumously but also their descendants for whom life could never be the same afterwards.

To all of them, to all of you: thank you.

It was also a reminder of the situation that was created after the 11 November 1918. The Peace Treaties that were signed in 1919 contributed greatly to the outbreak of WWII. And in the wake of WWII, decolonisation begot more conflicts around the world. We still suffer the consequences and more fights, and now more migrants. This long line of soldiers of WWI is not far from the long lines of today’s refugees. And children still want to play in fields flowered with poppies – not only the poppies of Flanders but the poppies that mark with their blood red colour the soil of our Earth.

Children playing in the poppies of the world

But today is Remembrance Day in France. It is still a holiday. The trauma and the liberation were too great and are not completely erased. True: more and more supermarkets and big shops/stores stay open. People do not stop in the middle of their activities at eleven o’clock for one silent minute. I am almost sure young people do not know why they are on holidays and what WWI (an antiquity) was. Nevertheless, there is still a ceremony at the war memorial (le monument aux morts), with le maire, le conseil municipal and the notabilities of The Village, as in all villages, towns and cities and in Paris under the Arc de triomphe in the memory of the unknown soldier (le soldat inconnu) and for all soldiers.

The War Memorial of The Village

But I have seen mentalities and sensibilities change during the past years. Fortunately.

My last great-aunt who died this summer at 98 was the last representative of the majority of the French sensibilities after WWI. She was born at Christmas 1917 and was “an accident”. Her brother and sister were much older than she was. She did not know the war except by hearsay; by heavy black weeds around her, widows, mothers without sons, young girls without fiancés, a country without men, and social conditions which had changed a lot. She never married. She hated les Boches, during her whole life. She was 22 when WWII began and she suffered from this war – not by hearsay. Her father was dead, her brother was called, made prisoner, escaped, joined the Résistance, as she did, was left for dead as shot among truly dead comrades. The house was broken into and invaded by Germans looting: all jewels and precious things that had not been hidden were stolen. She had all reasons to hate these soldiers and their country. But her hate did not abate with time, and she never understood how I could have gone on my own in a church in Bonn to pray for reconciliation with a lighted candle and enjoyed visiting Beethoven’s house! French soldiers in the trenches

She knew one thing: we had recovered l’Alsace et la Lorraine in 1918 and they were still ours at the end of 1944/45. She had welcomed all les pauvres gens qui fuyaient (the people who had to flee during the Exode) and she never understood why they, coming from the Eastern part of France, did not declare that the Dordogne cooking (la cuisine du Périgord) was not the best in the world!

This was a common state of mind in France: a long-standing hatred of the Kaiser, les Prussiens, and Germany.

It needed all the strength and the willpower of Robert Schumann and other “Europeans” to create the very first European Institution for steel and coal in the first years of the 1950. But the reconciliation between France and Germany was a long labour still under construction with President Giscard d’Estaing and Chancelier Helmut Schmidt (1974-1982) and openly shown by President Mitterrand and Chancelier Helmut Kohl when they were together holding hands during a commemorative ceremony of our wars.

The Germano-French symbol of reconciliation

My great-aunt foamed with rage!

My great-grand parents and my grand-parents were more divided and less representative of the French people. They had cousins and friends in Britain and in New-England, but also family in Germany, in the Austro-Hungarian Empire, Russia and Poland, Mitel Europa. My great-grand father spoke German fluently and had studied at Heidelberg. Music was German or Italian. Great painters were to be found in Flanders and Italy and in Germany as well. The baroque and rococo styles flourished in Bavaria and Austria.

The logo of the Heidelberg university

Their roots were not deep in France, but deep in Europe and they fought all idea of war. There was the same movement in Britain. It is well described in Kasuo Ishiguro “The Remains of the Day”. I have difficulties and feel unease with this book because I understand the temptation for an aristocrat with family and friends on both sides of the barricade to try and mend things, to find a compromise. In this case the compromise can be fatal. And there could be no compromise before WWII. It was slightly different before WWI as they were still living on the values of honour and “officers and gentlemen”.

Of course, in the end, they did their duty. They killed each other.

Les Gueules cassées – disfigured soldiers back from the war

They came back wondering why.

They blamed the 1919 Treaties and foretold WWII and the subsequent conflicts. 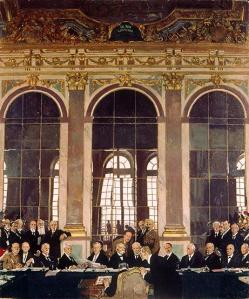 Signature of the Versailles Treaty in the Galerie des glaces (1919)

They picked up as they could their family links and friendships. They were considered as traitors by their neighbours.

In 1939, there was no hesitation against Hitler. They found who might have flown Germany, and the German and Russian spheres, and all together joined the Résistance. Their neighbours found them neighbourly again.

After WWII, they became staunch Europeans. Not Europeans of this neo-liberal European Union.

I went to Berlin and was told before, to go and see Unter den Linden – I think the idea and the name were important as much as Rupert Brooke’s poem “The Old Vicarage, Grantchester”, which begins with Berlin:

Just now the lilac is in bloom,

All before my little room;

And in my flower-beds, I think,

Smile the carnation, and the pink

And down the borders, well I know,

Oh! there the chestnuts, summer through,

Beside the river make for you

A tunnel of green gloom, and sleep

Deeply above; and green and deep

The stream mysterious glides beneath,

Green as a dream and deep as death.

How the May fields all golden show,

And when the day is young and sweet,

Here am I, sweating, sick, and hot,

And there the shadowed waters fresh

Lean up to embrace the naked flesh.

Drink beer around; — and THERE the dews

Are soft beneath a morn of gold.

Here tulips bloom as they are told;

Unkempt about those hedges blows

And there the unregulated sun

Slopes down to rest when day is done,

And wakes a vague unpunctual star,

A slippered Hesper; and there are

Meads towards Haslingfield and Coton

Where das Betreten’s not verboten.

I was told to buy music and books, to visit museums, go to concerts, the opera, enjoy the culture … and visit our cousins and their friends.

But there is always a tiny cornflower that raises its head to speak of peace and brotherhood: beyond policies and economy and finance and industry, there is culture. 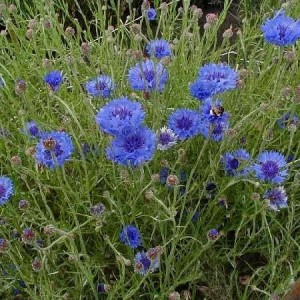