So, at long last, Wolf Hall has been broadcast by the French television.

This simple statement cries out for corrections and explanations, as simple as it is. First, it has been broadcast on the French and German channel, ARTE, which belongs to the public service and is the cultural and intellectual warrant of the French television. Second, it was not certain that such a series would be broadcast in France. It was not to attract crowds and television channels are here with an eye on the audience. Panem et circences… The French are not gourmands of costume programmes. They like reality shows, documentaries about their own history, but not much about others’ history. I guess it would be the same if the BBC, ITV or some US or Canadian or other foreign channel were to show some costume drama about French history. Except for some more or less exact rudiments about French history, like the prise de la Bastille and the existence of Louis XIV and Versailles, I do not expect that much is known abroad about François Ier or the Valois dynasty who reigned at the same time as the Tudors. As to Hilary Mantel’s novels, they were translated in French but they were not a great hit as in English speaking countries for the same reasons: lack of historical knowledge.

Although Henry VIII is rather well known in this country where he is associated with Bluebeard and heretics, I cannot take The Girls as a valid example of the general knowledge: theirs is distorted, both less important in some matters and more in others. They certainly know more about King Henry than the majority of their fellow countrymen. Nevertheless they both hate him greatly for killing his wives and think him  both cruel and mad. That could summarize the French attitude about him. As to Cromwell, he is utterly unknown.

And so, we watched TV.

The series came in two batches of three episodes each. Two weeks. I dislike this new format of an hour per episode but I understand that it is easy to divide them for publicity spots. Fortunately on channels still belonging to the public service there is no break and I feel lucky to have been able to watch twice three hours of Tudor England without being interrupted by adverts about sweets or washing powder. 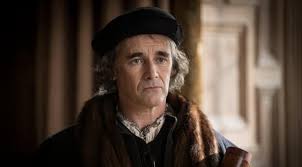 The first time, I had not re-read “Wolf Hall” and remembered the main features of the book but not the details. I found that Cromwell’s portrayal by Mark Rylance was almost feminine. He had nothing of the traditional courtier going up the social ladder including walking upon living fellows or corpses, allying with some people to deny their friendship later, usefully forgetting and selecting his acquaintanceships. By contrast, Thomas More was almost too good a villain, “the sainted More” as he is sometimes disdainfully called. Probably, we, belonging to a historically mainly Roman Catholic country, see him as a saint martyred by his king, whereas Anglicans or proponents of the Reform will think him a traitor. This is  how History is written. And this is important as it is the way differences are made in reading and watching or listening from country to country or from individual to individual. “Only connect”! This time, “only connect” with people’s general and individual backgrounds.

I thought Damian Lewis a good choice to play King Henry. He was the dashing young fellow courting Anne Boleyn, slowly maturing, putting on weight, ageing, wondering, pondering, still wilful and capricious, but being more dangerous and wild, more easily assuming his choices and quickly reaching his ends, be it in love and / or politics. But where is the difference between love and politics when you are king of England in the sixteenth century?

Anne Boleyn… Well, Anne Boleyn was never a favourite of mine. I understand she was beautiful, alluring, clever, religious in her own way, ambitious, misunderstood, in fact “a woman for all seasons” – to make a bad pun and a bad reference. It seems to me that she is mostly read backwards: as all know her end and the wrong that is done to her when the king becomes tired of her and falls in love with Jane Seymour, when she becomes an annoyance and does not gives the long-awaited heir that would comfort the dynasty – in a word when she is beheaded in order that another could take her place and have a “royal” son – as we all know this, she is either made a whore or a saint, a repulsive woman or an iconic woman. I have watched readings of “Wolf Hall” and “Bring Up the Bodies” made by feminists and watched them watching the TV series with their own reading grid: Anne had all and every qualities. She was lost in a men’s world and her fate was sealed from the beginning. What about Katharine of Aragon then? She was at least as clever and desperate than Anne and she had even more legitimacy. She fought and endured.

Therefore I was in two minds about Anne and I am still after watching the series. Claire Foy makes her as wilful and capricious as Damian Lewis makes the king. I would say that she is hard and cold as steel for her coronation and when at long last her path crosses the Spanish ambassador’s, Chapuys. The ambiguity of her guilt is almost erased: she is NOT guilty. Henry only wants to be rid of her and asks Cromwell to find charges against her. It seems that all charges are wrong, falsified, played at dice so to speak in twisting words and evidences. Human beings are played with: they are pawns towards one goal only: to kill Anne. And in this way, she becomes the martyr that Thomas More is for the French. 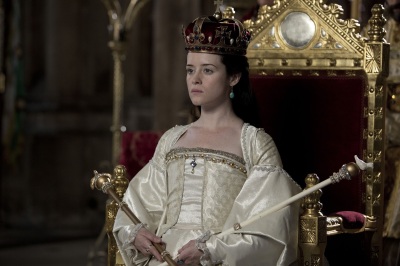 And this is when I come to the second volley of three episodes. I found them more interesting than the first one, both as characterisation and filmic technique.

I have to say that I mostly dislike books turned into films or TV programmes. Films and TV programmes put a filter between me and the text, my reading of it, my understanding, my personal relationship with it and with the author. I have to follow a reducing (in time, text and mental images) of the intention of the author and of my freedom to read as I please – reducing done by a director, producers, actors, and all people involved in the making of the filmic venture. I live it as limitation and a violation of my reading space and my understanding.

Being conscious of this epidermal reaction, I try with all my might to turn it into something positive and to make “it” a thing disconnected from the novel. “It” becomes a new object that does not impair and injure my reading faculties, but enhances my knowledge although outside the scope of the written fiction. Some people have read the book and this is how they see it and make it alive in their brains. Well, this is interesting: how does it fit with my own vision? What and how is it as a separate object?

The first three episodes were elliptic and sometimes difficult to understand for people not having read “Wolf Hall”. Scenes were standing alone where they were part of Cromwell’s stream of consciousness in the novel. Characters were numerous, unrelated, coming from nowhere and sometimes going nowhere, whole linking scenes were cut off, others were savagely amputated. It was rather like a jigsaw puzzle. The masculine part of Anne was as prominent as the feminine part of Cromwell and the king was a rather more a play thing than a puppet master. Cromwell’s climb was not that evident and his relationship with Wolsey was left somewhat in limbo.

I grew more interested with the three last episodes.

Characters were at last endowed with some “roundness” – as EM Forster (again) says of flat and round characters -. Cromwell was gaining mostly in depth and “thickness” by flashbacks returning to his childhood and youth. I mean here the flashbacks to his relationship with his father in Putney, the famous opening scene of “Wolf Hall” the novel where he is pummelled and thrashed by his father with a violence that takes away the reader’s breath. Or the scene where his father teaches him to fight pain. His relationship with Wolsey was also seen in flashbacks. His relationship with his wife and daughters; his relationships with the Boleyns and their court of flatterers. The way he made up to being the King’s confident and the dangers that induces. His relationships with his son, Gregory, and the young men with whom he surrounded himself as help and spies. The networks that are needed to be a true courtier and a man of power – hidden power being better than showy.

I write both in present and past tenses as then the story and history blended, as the individual story of Cromwell took tones of the universal story of power and how to gain it, to make it grow, to live with it, to manoeuvre it, to use it, not to be eaten by it and its lures. There came Niccolo Machiavelli and Baldassare Castiglione. There came at long last la Renaissance and its men as bridges between a world that was not entirely dead and another that was being born.

I was re-reading “Bring Up the Bodies” at the time and was able to play more aptly between novel and film. Although, the latter remained a singular object in its own right, I could see more clearly the work that had been done by the people involved in its making. The actors were allowed more span and they stretched themselves and their abilities. Henry expanded and became king though with tinges of mania. Anne shrank. In the end, when going to and standing upon the scaffold, she looked no more the steel woman but the delicate and broken puppet doll. The Duke of Norfolk, her uncle, had chaired the court where she had been judged and her menfolk, helped by her sister-in-law had turned against her. Jane Seymour was no saint but a scheming young woman, as Anne had been, drawn into the game by her family and her own will. Cromwell played the king’s pleasure and met his debts.

Most of all, the director and the film editor were at juggling with cameras and images masterfully. This was definitely not the novel but it was as good an object as the novel itself. People watching would still need to know the story that was told before us, and it was made easier by having read the books, but it was really and truly a separate object of beauty in its own right.

If I am to sum it up, did I like these series? Yes. Did I find them faithful to the novels? Yes and no. But the no is positive. No paradox here. Just the acknowledgement that the reading made by the director suited me and that it suited me better in the last three episodes than in the three first ones. Why did this reading suit me? Because it was clever and used the text in a compact way, slicing through it, but keeping the essentials, and showing them with filming techniques that have no equivalent in literature. In this sense, it was another grammar, another vocabulary, serving the core of the story and History.

From the stories of individual men and women, a universal history of power was unfolded before us. 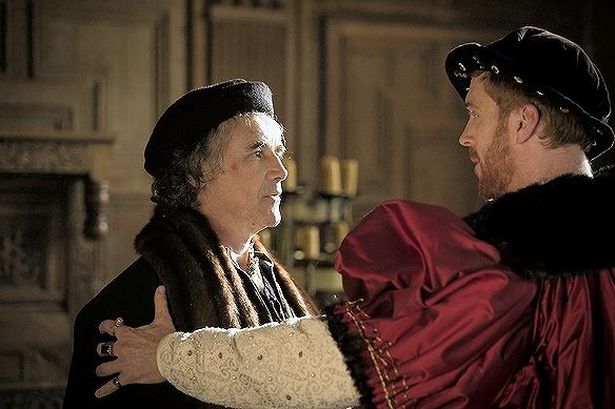