When I wrote the last post, I never thought I had so many comments upon the books I liked or disliked when I was a child. Therefore I searched in my memories for what I did read or, at the very beginning, was read to me at bed time.

One and only one book comes to mind: ” Un Chat dans la Lune” (A cat in the moon). Why, I don’t know. I don’t even remember the story. But I remember vividly the cover of the booklet – the cat with its hat and feather, playing what I wanted to be a mandolin. Perhaps, it is no mandolin but a guitar. However, Father played the mandolin among other instruments, and I found the whole thing fascinating: the word, the instrument itself, the sound, and the fact that Father used it to accompany himself while he was singing. In my mind, I saw Father dressed as the cat on the book cover, with the hat and feather, a dark cape, like the mousquetaires or Cyrano whose statue I had been shown in Bergerac – a small town nearby – singing to Roxane under her balcony.

I was a precocious child. I had to be: I was “sandwiched” between a disabled brother who suffered from myopathy, and a disabled sister who “suffered” from Down Syndrome. There was no great place for childhood.

One of my first memories was being awoken to watch Aeschylus’ “The Persians” on TV when I was four. My parents thought it was a great rendition of the play – half play and half opera – and they were right. I treasure this memory; I have the DVD and I watched it with The Girls a year or so ago. But this was not really childhood literature indeed. Eccentric education. 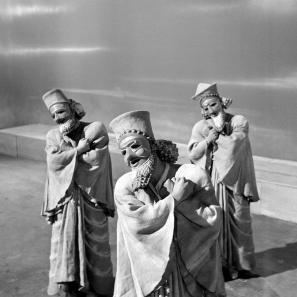 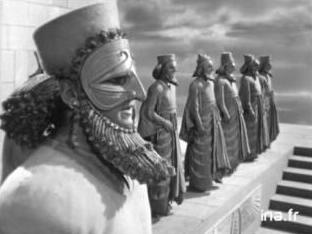 After “Le Chat dans la Lune”, I remember a book that belonged to my sister, over which I puzzled a lot. There was no text but images only. It was a fat book with nine “boxes” per page and they were supposed to tell a story. But there was no separation between the stories and it irritated me not to find a clear, defined beginning and end to each tale. I understood much later that it was a means to make my sister speak, describe the images, and eventually find the link between them.

But I was soon put to my first primer. It prided itself on addressing itself to children from to 0 (!) to 6 years old. I was early but not very much when I started, although I do not truly remember myself without this book. 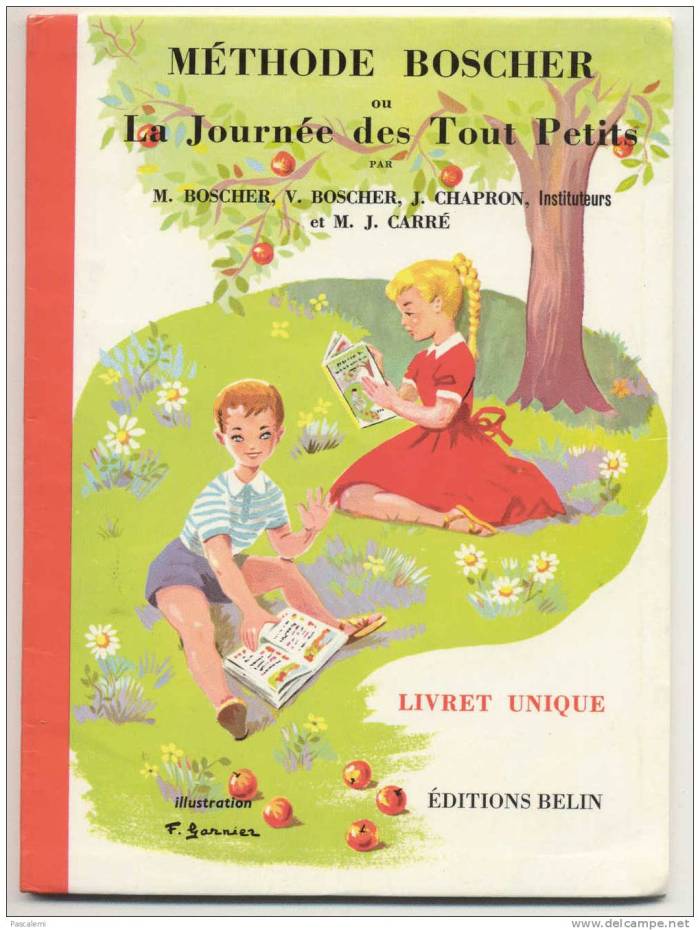 It was very complete, with realistic images from the 1950s/1960s, little sentences, examples to learn to write and count as well as read. It was an easy method or it worked particularly well with me. I learnt with Mother and these daily lessons were a pleasure. At the end of the book, I could read the little stories – quite moral – and learn the poems. I discovered later at school that the poems might have been rather difficult and from “good” poets as what I learnt there (at school) seemed too simple. In fact, I was bored at school. I was bored nearly until my second year of university. Home was the real place where I learnt and school was a rehash of notions I already knew. 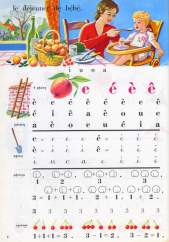 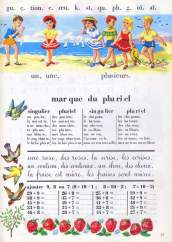 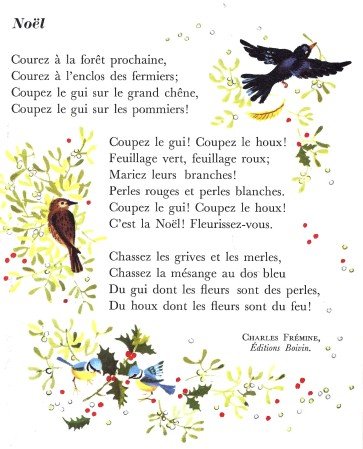 When I knew how to read, I was given books. The first ones, unless I mention the old story books coming down from great-grand-mothers/fathers/aunts/uncles from the 19th and the very beginning of the 20th centuries, were series about two little girls, “Caroline” and “Martine”, both in the 1960s editions.

“Caroline” was the favourite. She was the only human being in charge and she did things adults might have done. She had friends who were all animals. We never had pets at home and we still have none. We have always welcomed the stray cat who would keep his dignity and distance with us. We never had dogs and we still flee from them: my sister was bitten by a vicious small basset who belonged to a great-uncle and a great-aunt who treated him as their child. This accounts for his jealousy towards us when we were petted during our visits. My sister being the one he could reach easily bore the brunt of his feelings.

“Caroline’s” friends were different. There were dogs and cats but a little lion as well and other exotic animals. They were anthropomorphic and reacted as human beings, eating spaghetti (one of my most favourite ever illustrations, as I loved solid food when I was a child), skiing, bicycling, moving house, etc. The whole under Caroline‘s strict supervising. As I liked her, I must have been a bossy child…

“Martine” was very, very different. She had a family with parents and a brother. She had friends. She was going to school and she had lots of adventures within the strict compass of a saccharin reality suited for children – well, for girls – well, for middle-class girls – well for middle-class, white girls. She was tedious and tiresome. She did everything perfectly right. She could take care of a whole house in one morning while her mother was out, cleaning up, washing up and washing, having the whole clothes and linen dry, cooking – even profiterolles! -, setting the table, adding flowers to the house, taking care of her dog, and putting herself to rights, all before her family came back! 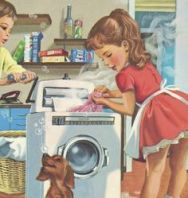 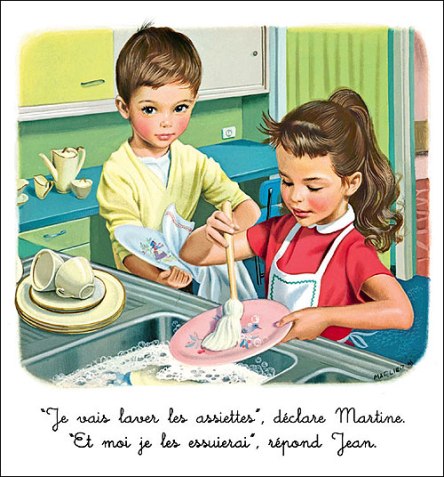 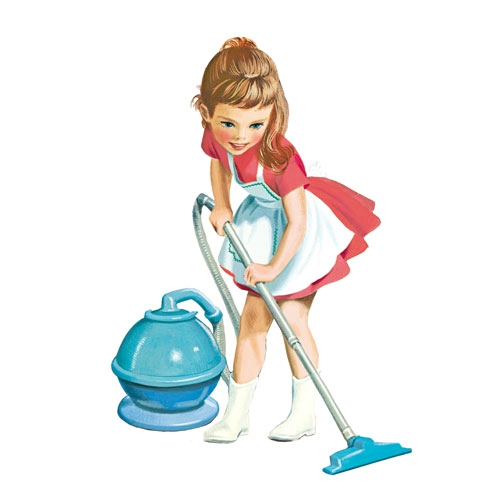 “Martine” knew all about the seasons and enjoyed them all. The year went round without a hitch: she cared for the birds in winter, did gardening in the spring, spent nice holidays during summer and went back happy to school in autumn. 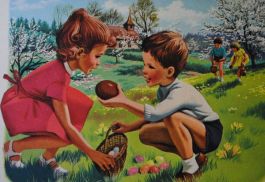 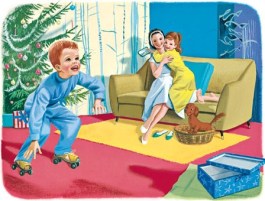 Everybody loved “Martine”. She was the one and only star among her friends who looked up to her. She was loved and praised unconditionally by her parents. She never started a feud with her brother. Even her dog adored her and did tricks – I mean useful tricks – to help her. This girl was no girl: she was a lay saint. 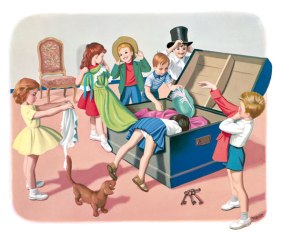 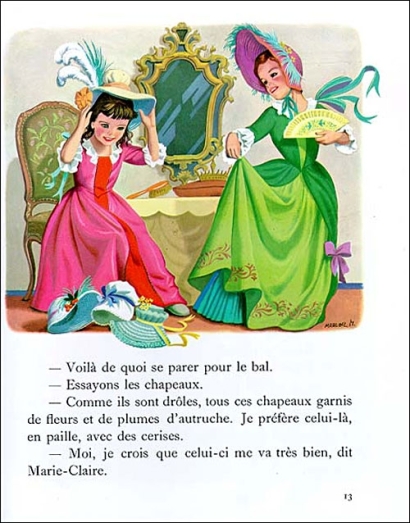 I much preferred “Titounet et Titounette” who appeared in the first newspaper to which I was subscribed. It arrived every week and I could not wait for it! There was a gender role separation between “Titounet” the boy and “Titounette” the girl. But, as with “Caroline”, their friends were animals who reacted like human beings. They lived with an undescribed adult, probably their grand-mother as she was referred to as Mamie (Grannie), in a remote place called Le Bois Joli (The Lovely Wood). Their friends were a family of rabbits, another of bears (more like teddy bears), a cub, squirrels, little birds, spring (the spring season was represented as a boy dressed in a somewhat Renaissance green costume), a fawn, an owl, two mischievous white mice that I loved, etc. I shared their stories with my sister and we were given albums of their adventures. The newspapers were later on bound, year by year, and we still have them. They belonged – and still belong – to our private world. 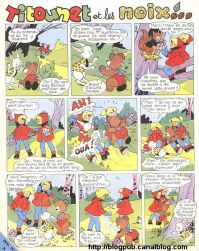 And then, came my two great loves, not in the 1960s edition but in the beginning of the 20th century editions: “Bécassine” and the novels by the Comtesse de Ségur, the latter with the illustrations of André Pécoud. Of course, they were old books. And “Bécassine” was appearing in her beginnings in 1905 as “Titounet et Titounette” did in the 1960s: as features of a weekly magazine for children – mostly girls. The newspapers had been bound with leather covers and I had the hardback albums of the complete adventures as well. A whole post should be dedicated to “Bécassine”: she is such a cultural phenomenon that I shall not try to explain her here today.

I do not know whether the children’s books by la Comtesse de Ségur, née Rostopchine, are known in English speaking countries. They are a whole phenomenon in themselves also. Even if they are firmly set in the mid-nineteenth century, they are still read today as classics for children. And yet, moral is heavy within them as well. Add to this, class division, gender division, corporal punishment, a pinch of Sadistic treatments, a jingoistic vision of society and cultures, and the personal history of la Comtesse, and you have something that should be repellent to any normal child. They were my joy; they are my joy. I reread part of them each year. Not with the same eyes and attitude. I think the illustrations did a lot for my enjoyment when I was a child. They are not at all 19th century; we have books with the initial drawings or etchings; they are totally different. No. I loved the lightness of line in the drawings. They were like sketches and nothing more was needed to give life to the characters because a space was left to my imagination. 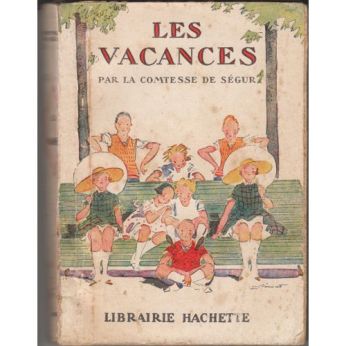 I was so bored when I started the elementary schooling at five that, while the class (where the average age was six) was learning to read, I chose a seat at the back of the room, and started writing follow-ups of la Comtesse‘s novels. I got caught of course and it was the first of the numerous times when my parents were called in by the teacher to be told that their daughter was not attending but doing things on her own. I was always scolded, but I skipped classes, finished elementary school earlier than usual – the same with secondary school. 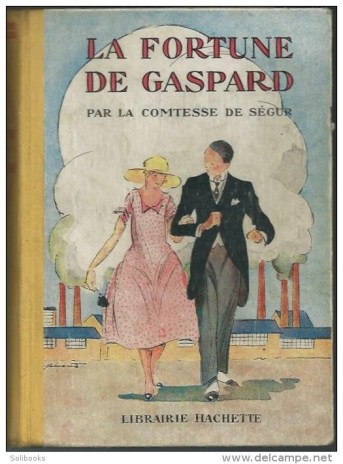 I should really never have watched Aeschylus at four: perhaps it would have been more natural to stick with “Le Chat dans la Lune”!

4 thoughts on “After the tea party, more children’s books”