This is a blog by Theodora Gross that I thought fit the situation of The Little Family, including mine – and perhaps yours.

The year I was finishing my PhD, I would go to a therapist once a week. I was trying to manage depression, which honestly I think is pretty normal when you’re finishing a PhD. That sort of intensive work, for that long, can be so difficult — you spend your days staring at a screen, trying to make the words and ideas fit together, and then you try to manage the rest of your life at the same time. It was one of the most difficult periods of my life.

Anyway, we talked about my childhood, and one thing she told me was that I was a “caretaker.” I think she said that partly because when I was about twelve years old, I became responsible for taking care not only of myself, but also my little brother. Then later I started babysitting, taking care of other children. Even later, I worked at summer camps. Almost all the jobs I had before going to law school involved taking care of people, in one way or another. But it started with taking care of my little brother.

There is another way of being a caretaker. Somewhere along the way, I was taught to do what we now call emotional work: that is, taking care of the emotional needs of other people. Being not only responsible, but also responsive. This is something a lot of women are taught, of course. I think I learned it because I was raised in a Hungarian family, where you were not only supposed to do the appropriate thing, you were also supposed to feel the appropriate thing. To respond in a way the family thought was appropriate. If you didn’t, you were called an ungrateful American child. Or spoiled. I’ve been called spoiled many times in my life. It’s an interesting word, with an implication of rottenness — if you don’t behave or feel the way you should, you are somehow rotten. I think a lot of people were raised this way, although it was starting to change when I was a child — there was already a sense that children should develop their own sense of self, should learn to stand up for themselves, to create their own boundaries. But that was not part of my upbringing.

So I became a caretaker, and for the most part I remained one. As I lawyer, I took care of clients. Later, as a teacher, I took care of students, and of course I still do. In some ways, it’s like taking care of your little brother. It doesn’t mean giving him everything he wants — it means making sure he heats a healthy dinner, does his homework, goes to bed at the right time. Taking care of students means sometimes giving them things they don’t want, like grades they will be unhappy about — because hopefully they’ll learn from getting a “bad” grade, and do better. It means doing what you believe is best for someone else.  It also means listening, intuiting what is not said, caring.

There are good things about being a caretaker: if you’re doing it well, it’s helpful to other people. It makes conversations and interactions better, smoother, easier. This would be a difficult world without nurses and teachers, the types of people who are tasked most directly with caring for someone else. I don’t just mean helping — a surgeon can help you without exchanging a word with you. But nurses do both the emotional and physical work of caring, and that’s really what I’m talking about.

The danger of being a caretaker is that it can consume you. Taking care of other people is one of the most exhausting things you can do, as anyone with small children knows — in that situation, you are responsible for all their needs, physical and emotional. When my daughter started daycare and I went back to work,  I was surprised by how much of a relief it was to do that sort of caretaking instead.  I loved being with my daughter, but taking care of undergraduates, even sixty of them, was so much easier than taking care of a single two-year-old! That was of course because two-year-old children have no boundaries at all, physical or emotional, whereas teaching creates boundaries as well as connections — the emotional work of interacting with students was much easier.

Most women will know what I’m taking about when I say that caretaking requires emotional work, different amounts depending on the situation. Women are usually taught to do that work as they grow up — they are taught to be caretakers, to make others feel comfortable. They are taught to agree, to be agreeable. To defer when they are told they are wrong, to respond when a response is asked for. They are taught to take care of homes, men, children — and anyone they are in conversation with. If you’re a woman reading this, you probably have an instinct, in conversation, to make sure the person you’re talking to feels comfortable. It’s like putting a pillow under someone’s head. Smoothing a coverlet.

There are good things about that kind of work — another word for it is politeness, and back in the nineteenth century, gentlemen, as well as ladies, were praised for their ability to do it. Somewhere along the way we stopped asking men to do that sort of emotional work, and in male discourse we began to value authenticity. Speaking your mind became a masculine trait, although in women we still valued the ability to soothe, to make comfortable, to take care. That’s changing, although we’re at the point where women are being given the advice to speak up and ask for what they want, then penalized for doing so. It’s a confusing time. The bad thing about it is that, once again, it’s exhausting. Have you ever been in a conversation with someone you disagree with, but that person is also someone you need to treat with respect and politeness — maybe an older relative? Nodding, smiling, saying the soothing thing? Not getting into an argument? And ended up with a splitting headache afterward? Yeah.

What I want to say here is that being a caretaker can be a good thing, but you can’t do it all the time. You lose too much — to much energy, too much of yourself. There are times when you have to draw boundaries, when you have to retreat behind your own walls. You have to take care of yourself. That’s a cliché, but it’s true. There are times when you have to prioritize your own work, your own needs and desires, or you will burn out from trying to provide heat and light to other people. And caretaking can become a place to hide.  A substitute for finding your own way, doing your personal work. It’s so easy to say “Everyone else needs me” and ignore yourself. It’s so easy to find emotional fulfillment in meeting everyone else’s needs, at least for a while. Parents sometimes realize that as their children grow older and they think, wait, what was I going to do with my life again?

Caretaking is not enough. Taking care of other people’s needs isn’t enough. Even saving the world isn’t enough if you lose yourself in the process. Although saving the world is a very good thing to do, of course. Society needs caretakers, and honestly we could probably use more of them. Some of the people who are supposed to be caretakers aren’t doing a very good job (politicians especially — anyone remember that they’re supposed to advance the common good?). But don’t let yourself be trapped in being a caretaker. That’s not good for you, or ultimately anyone else.

Take care of yourself too. It’s not new advice, but I think it’s good to be reminded of it every once in a while. 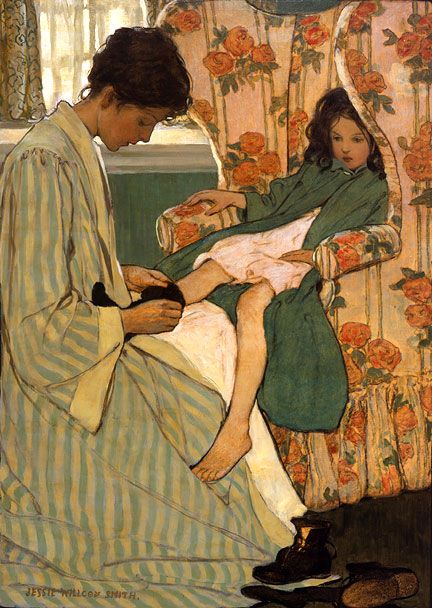 (The painting is by Jessie Wilcox Smith.)